The Moscow Metro was created in 1935 and serves the city of Moscow, along with the
neighboring cities of Krasnogorsk, Reutov, Lyubertsy, and Kotelniki. The total route length of
the Moscow Metro is around 400km, and it has 232 stations. This makes it the fifth longest
metro system in the world. The Metro is almost entirely underground, with the deepest part of
the system being Park Pobedy station (84 meters underground). It is the busiest metro station in
Europe and is also a tourist attraction sought out for by many tourists. 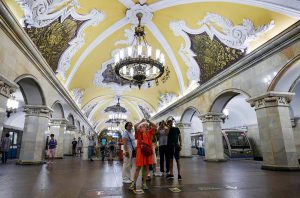 Komsomolskaya station of the Moscow metro

Park Pobedy station is in the Dorogomilovo district of Moscow. It is the fourth largest
metro station in the world. Park Pobedy has numerous unique aspects of its design that make it
special. For example, it has two platforms, designed by Nataliya Shurygina and Nikolay
Shumakov, that have the exact same design but with opposite color schemes. The Pylons along
the outbound platform are made of red and grey marble. Lastly, the station has two murals which
depict the 1812 French invasion of Russia during the Napoleonic Wars and scenes from the
Great Patriotic War. 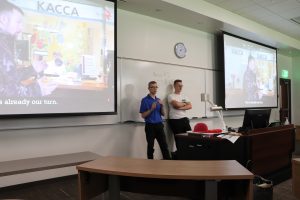 Many stations in the Metro have reflective marble walls, high ceilings, and grand
chandeliers. These designs embodied the Stalinist ideals of светлое будущее, which means a radiant future. The engineers of the metro recognized lighting as a legitimate style of artistic
expression. They used experimentation with different materials (cast bronze, aluminum, sheet
brass, steel, and milk glass) to their advantage, creating styles and methods that used technology
to its most efficient extent. The Metro serves a practical purpose by assisting many in their daily
lives with its efficiency of travel, but the design of the Metro itself is a thing of architectural and
artistic beauty.

What is your favorite Moscow metro station? Leave a comment below or on our social media using #STARTALK_UCF_2019