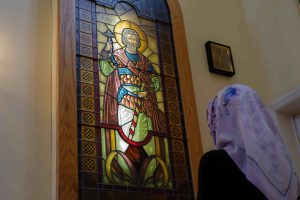 On Thursday, July 18th the UCF STARTALK Program went on an excursion to St. Petersburg, Florida. While there, we toured Saint Andrew’s Russian Orthodox Church where we learned of the religious aspects that are brought to Russian culture through the church. The Church was established in 1948 and serves the community of St. Petersburg. Over the decades, St. Petersburg has acted as a cultural center for Russian immigrants with the church at the center of it. Though it has moved its location over the years, St. Andrew’s has remained a focal point of the Russian émigré community, making our trip there a worthwhile visit and giving program participants an intriguing look into Russian culture. 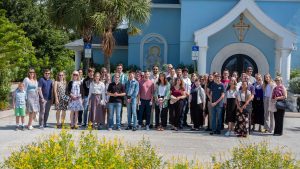 Afterward, the group went to the Florida Holocaust museum also located in St. Petersburg. While there, students learned about how the Holocaust affected large amounts of the Russian population during the Second World War as well as how the Holocaust still affects Russia today. The museum was established in 1992, moving to its current location in 1998. Founded by Walter Lobenberg, a local businessman and philanthropist who was a German Jew who escaped the Nazi’s in 1939, the museum serves as a place to document the lives of those who survived the Holocaust and memorialize those who perished. Over the years, tens of thousands have visited the museum, and it has become one of the most renowned institutes documenting the Holocaust in the country. It is certainly the top Holocaust institution in the South Eastern United States.

What was your favorite part of the field trip? Leave a comment below or on our social media using #STARTALK_UCF_2019